This week, I’m thrilled to introduce to you a fellow WWII author, Ace Collins. He’s a master storyteller. He’s recently released a new volume of In The President’s Service, a series about Helen Meeker, FBI aid to Franklin D. Roosevelt. If you like a thrilling adventure, wisecracks, and WWII, you’ll enjoy these cliffhanging books by Ace. Read through to the end because there’s a giveaway!

Why did you write historical WWII novels about the FBI serving FDR? Such a unique spin on WWII.

I was asked to continue the adventures of a character I introduced in The Yellow Packard. I’d really enjoyed creating Helen Meeker and given the chance to expand her character was a challenge I really wanted. She is interesting on so many different levels and she is also very complex. Thus a series would allow me to really explore all that and more. Plus, during the 1940s, one of the most interesting times in American history, we first began to see women entering worlds that had once been reserved for only men. So what an interesting period of time to have a female lead with courage, conviction, intelligence, and drive. 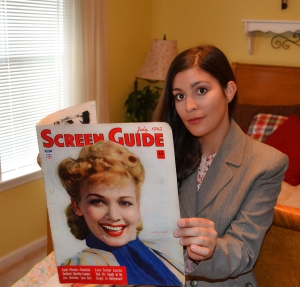 Incidentally, Ace uses model Alison J. as the inspiration for FBI agent Helen Meeker, the no-nonsense heroine of In the President’s Service series. She’s pictured here with a Screen Guide from July, 1942. Carole Landis is on the cover.

What you love best about your first three novels.

The first three created the foundation for the series, thus they gave me a chance to place our lead in the historical period and fully paint the times and the demands of those times. I think those books also pointed out that we don’t win in life all the time and thus my characters didn’t always win as well. Some even died. The loss the survivors experienced really hurt them and shook their confidence. That makes them much more real than those who just let everything roll off their backs and never question their actions. Finally, the books contain hard choices and complicated characters and these first three novels pointed [and] built on that and created a pattern readers could expect.

What was the hardest part during the process?

Making sure everything was as historically accurate as possible as I wound through the fictional adventures. That is where the research comes in. Normally novel series don’t have to concern themselves with facts; this one does. As World War II is so well documented I have to have things happening in the right order to the point of pinning down specific dates and times.

What did you learn from the writing, editing process?

An author should learn with each new project … the research demands it. In this case, reading old newspapers, magazines, watching newsreels, and listening to vintage radio broadcasts is giving me a new window to World War II. By using these sources I view reporting as it happened, not filtered by historians who have the advantage of knowing how things turned out. We often forget that in the early years of the war we didn’t know who was going to win.

What keeps you going?

I love to tell stories. That drives me. I love to do research. I have a quest to find out facts. This fuels all of that. Also, when you get to write a million words about characters, they become very real. I’m therefore driven to drag them out and play with them.

Who inspired you to write or helped you along the way? 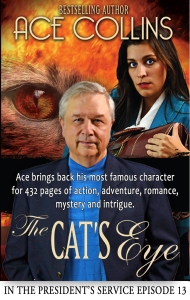 Rick Cox was an editor I had in my feature writing days who honed my work and taught me how to think like a writer. I had two English teachers in high school that pushed me to write and a college professor, Ann Miller, who told me I had the talent and imagination to be an author. On top of those, my Arkansas grandparents fueled my interest in storytelling because they were master front-porch storytellers.

Where did you find the most interesting pieces of information for your first three books?

Classic radio news programs and old copies of The New York Times were sources that really gave me some gems. I think including the music of the era, along with motion picture references and slang also created the right mood and those things came from books and movies.

What is inspiring to you?

To always continue to grow! I told someone when I was eighteen my biggest fear was stagnation. I didn’t want to get to a point and remain at one level and stay there. Writing is my avenue for avoiding that.

Fun Fact: The photos of the Christmas stamps and postcard are from 1942, the year that the first volume of In The President’s Service takes place.

Ace’s encouragement to you

My bestselling book of all time was rejected more than two dozen times over a decade before I found an editor who thought it had merit. So my best advice is … if you feel you have a good idea don’t give up. Keep pushing until you find someone who shares that vision.

In the President’s Series 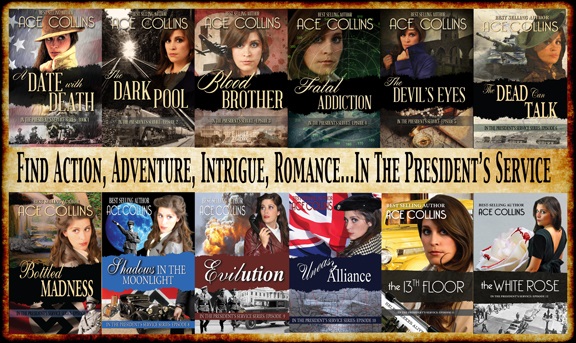 In 2017, new episodes from In The President’s Service continue to be released by Elk Lake Publishing. The most recent is The Cat’s Eye with another novel, The Red Suit Case, set to hit the market at Christmas. Others in this series include A Date With Death, The Dark Pool, Blood Brother, Fatal Addiction, The Devil’s Eyes, The Dead Can Talk, Bottled Madness, Shadows In The Moonlight, Evilution, Uneasy Alliance, The 13th Floor, and The White Rose. 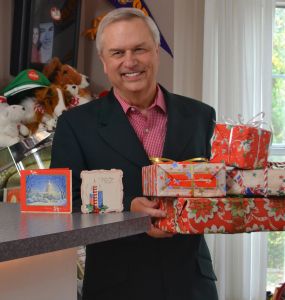 Citing his Arkansas heritage, Christy Award winner Ace Collins defines himself as a storyteller. In that capacity, Collins has authored more than eighty books for 25 different publishers that have sold more than 2.5 million copies. His catalog includes novels, biographies, children’s works as well as books on history, culture and faith. Collins’ hobbies include sports, restoring classic cars, Wurlitzer jukeboxes and running. He is married to, Dr. Kathy Collins, the Chair of the Department of Education at Ouachita Baptist University. The couple lives in Arkadelphia, Arkansas, and has two grown sons.

Thank you for reading and for entering and for sharing this blog post with your friends on social media.

For December’s blog giveaway, we’ll explore Christmas during WWII with a special FBI Christmas-filled giveaway with suspense, humor, and intrigue:

The Red Suit Case follows three FBI agents as they seek to discern the real meaning of Christmas through the eyes of a small boy who fears  Santa Claus has become a casualty of war.