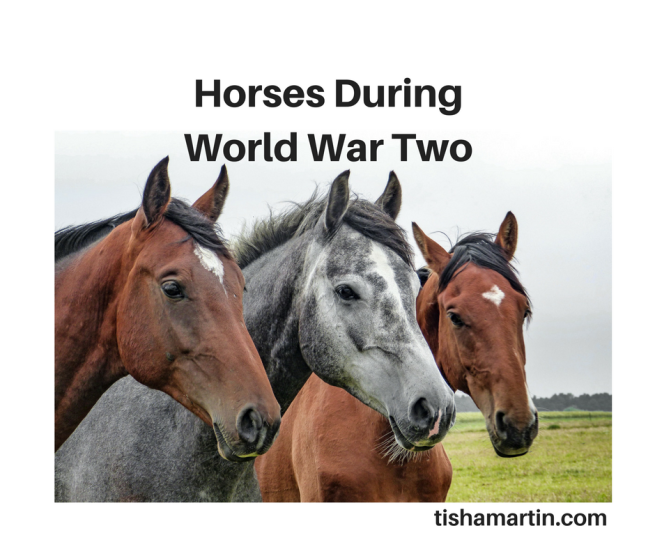 I’m excited to welcome guest blogger, Barbara Ellin Fox, today because we speak the same language. Horses. We both write about horses in our books, so it’s a double delight to host her!

In my WWII novel-in-progress, my character Laurie wants to help retrain retired cavalry horses with her stepmother.

Barbara’s here to share the history of the mounted cavalry and why it disbanded during World War Two. The cavalry didn’t entirely dispose of their horses, though—continue reading to find out what they actually did with their horses! We’re ready, Barbara!

The United States military has been steeped in cavalry tradition from the days of the Declaration of Independence. The Cavalry represents honor and valor, brave men dashing to the rescue of the weak and saving the day. Officers are the heroes and gentlemen of stories and we picture their bold horses as sacrificial, giving their lives, lying down to provide cover for the soldier under fire, slogging through the mud, and bonding with man on long bivouacs. Needless to say, cavalrymen were passionate about the path to which they devoted their lives and the horses that helped them. And when talk about mechanizing the cavalry and doing away with horses began during WWI, the pro and con arguments were strong and remained so even after the military became totally mechanized in 1942. To read more about these arguments visit In Defense of the Horse . 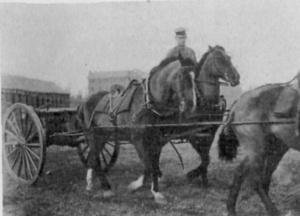 To have a general idea of the process of going from a horsed military to mechanized, a reader needs an overview of how horses were governed in the military. In 1908 the Congress authorized the formation of the Remount Service to obtain horses, care for and give them basic training before providing them to units. Prior to the Remount Service the Quartermaster Department obtained and trained the animals. The Remount also supervised the Army breeding program from which they selected horses for the military. The Remount supplied horses to the Cavalry and the Field Artillery, as well as any other branch requesting them.

The Cavalry School was at Fort Riley, Kansas, but horses were used at the other forts for military training, and also for competition. Competition was keen between forts in polo, show jumping, cross country, fox hunting and all manner of horse sports, whether competitors be Field Artillery or Cavalry.  Field artillery horsemen rode the horses in addition to horses pulling weapons and supplies. Until the 1950s equestrian Olympic teams came from the cavalry and field artillery horsemen. 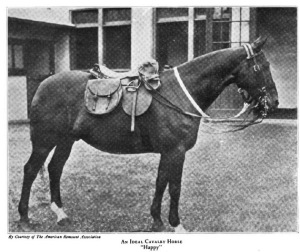 Forts housed large numbers of horses. In 1918, Camp Cody in New Mexico could handle 10,000 horses. To see the vast stabling at a base like Camp Cody, Take a peek at this interesting video. At the beginning of WWII Fort Bliss housed 6,000 horses, not an uncommon number. During WWI approximately 571,000 horses and mules went through the Remount system.

The last war the U.S. depended on horses for battle was WWI. More than 243,000 horses were used by the American Expeditionary Forces, but in general, an estimated 8 million horses were used during WWI by the engaged countries, with almost two thirds of the horses used by England and France coming from the U.S. and Canada.

Horses were not only used to carry men into battle, they pulled guns and supplies and also carried the wounded to safety. Horses could pull through the mud and bad conditions motorized vehicles could not. And they were faster and handier through forests where vehicles could not go. At home, cavalry patrolled and protected U.S. Borders and coasts.

At the close of WWI, the Quartermaster Corps had 39 remount depots and could handle just under 230,000 horses at one time.

Voices in favor of a mechanized cavalry began during WWI (1914–1918) and continued through WWII (1939–1945) as the mounted cavalry went through the stages and process of becoming armored. Full mechanization became reality in 1942 but the process of de-horsing took longer. 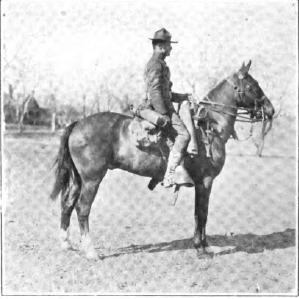 In 1940 the military horse had been reduced in number to just under 17,000 plus 3,500 mules. 3,000 horses were requested by the Coast Guard for beach patrols but by 1944 they were no longer needed. Mules stayed in demand a bit longer than horses because they were used for pack in jungles and in the mountains.

Horses were not suddenly given up by the military, nor were they completely banished. The government maintains ceremonial horses today.  But the process to mechanization was slow and followed the orders for a unit to be mechanized, such as the 696th Armored Field Artillery Battalion which lost their horses on December 1, 1941. Occasionally units kept their horses until orders were received for overseas assignment as a dismounted unit, as did General Swift’s division in 1943.

Horses and equipment were turned in to the Quartermaster, and were transported to a remount depot in strategic locations in the U.S. Although the government transported horses by truck in convoy, the more common method was by train.  Twenty horses were loaded into each of 25 cars, allowing 500 horses to be transported at one time.  Horses were dispersed through public auctions.

There are always unintended consequences with progress or change. Mechanization was hard on the cavalryman who loved his horse and way of life. Sadly, some were so blinded by their passion for the cavalry they were not able to accept the changes and became bitter. And mechanization of the cavalry moved our equestrian Olympic team into a new era in “civilian” hands. The bonus consequence came to the horse loving public by way of an influx of riding instructors with cavalry training and tradition. These cavalry instructors set U.S. horsemanship on a strong course for the future.

Thank you so much for joining us today, Barbara!

Lucian K. Truscott, Jr.’s book, The Twilight of the U.S. Cavalry, is an excellent source for further reading on this topic. 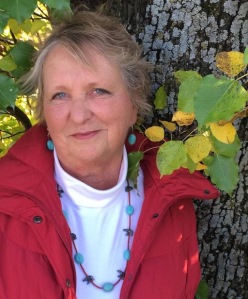 Barbara Ellin Fox is a life-long horsewoman with a passion for writing. A riding instructor for more than 50 years her blog, The Riding Instructor, offered help to budding instructors for 10 years. Passionate about the history of riding in America she also writes U.S. Horsemanship, a blog to help preserve our riding culture for future generations.

A fiction writer, with a tag line “love, hope, healing and horses,” Barbara writes romance about passionate horsewomen. Rylie loves Grand Prix jumping, Kristi has a heart for America’s wild horses, and Lizzie lives for Thoroughbred racers. Each woman has her own baggage and wounds to overcome. And they all come up against cowboys who are unprepared for the heroine’s unwavering commitment to the horses.

Barbara lives in the MidWest with her horses and husband. Her two grown daughters and teenage granddaughter live nearby. Barbara would love to connect with you on her blogs or social media to chat about horses, answer horse related questions, or talk about love and God.

Reader, thinking about the cavalrymen during the wars and how much they loved their horses, I’d like to know…

What brings you pleasure?