Working backstage theater is one of the most rewarding aspects in the creative world. You get to see a lot of things happen, take shape, and touch a lot of lives. Plus, you’ve never seen so much coffee consumed or donuts eaten in your life until you’ve been backstage!

During the time I worked backstage primarily in the costume department but covering many other areas, I met a lot of wonderful people, including Stephen Burke and family who have a beautiful outreach with the Shining Light Players.

Since 2013, Stephen and his family has written and produced several plays  featuring the lives of missionaries and scenes from classic literature. At an event several years ago, I watched Stephen and his wife, Alisha, perform the story of Jim and Elisabeth Eliot. Such a powerful story with a heartwarming message of hope and inspiration about the dedication of this great missionary and his wife Elisabeth.

The Shining Light Players travel all over the US and perform in local theaters, universities, and churches. In 2019 alone, they have been in sixteen churches from Atlanta, Raleigh, NC, Virginia, West Virginia, Maryland, and Washington, D.C. Some highlight performances include The Hiding Place: Life of Corrie ten Boom, The Day of the East Wind (Jonathan and Rosalind Goforth), and A Little Women Christmas.

Who Is behind Shining Light Players? 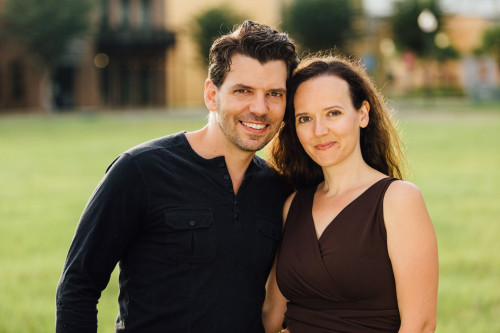 At age twelve, Stephen and his two sisters established their own theatre company, producing a Christian musical every year for the next five years. And since then, he’s been involved in performance and dramatics, using his gifts and talents however God leads. While earning a bachelors and masters in performance and dramatics, he was blessed with the opportunities to further develop his skills as the Staff Production Director and Playwright. He enjoyed writing numerous plays and directing twenty plays and musicals until 2013 when the Lord led him and his wife to step out on faith and work full time with the Shining Light Players.

Alisha’s mother, Brenda Wood Coggins, was a gospel singer and pianist who always encouraged Alisha to use her talent for the Lord. She coached Alisha to sing her first church solo at age four. She grew up singing in church and attended Pensacola Christian College where she received bachelors and masters degrees in music and speech performance. She went on to teach music and speech classes at Pensacola Christian for thirteen years, and then studied for four years under acclaimed Metropolitan Opera Tenor, Ray Gibbs. Alisha has been a featured soloist on numerous recordings and television broadcasts with Rejoice Music and has acted in over twenty plays and productions including “I Am The Way” with Jerome Hines.